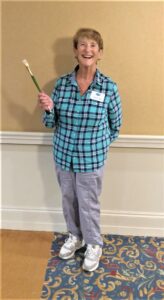 StoneRidge resident Trisha Grabel, 88, has been creatively inspired by the light, ocean, and beautiful scenery of Westerly and Mystic.  She has produced an extensive collection of acrylic paintings over the past five years and the culmination of her artistic efforts will be on view at a solo exhibit and sale at the Tapped Apple Cidery & Winery, 37 High Street, in Westerly, Rhode Island from September 16 through October 20.

Grabel paints with acrylics and her work covers a wide range of subjects, including landscapes, abstracts, florals, and still lifes.  Her 2022 installation will include 34 works of art, ranging in size from small, tabletop sized to expansive.

Grabel says that her style has evolved from expressionist to abstract expressionist.  Her work, she says, “Is fueled by my exuberance, imagination, intellect, and love of color and motion.  Nothing is rendered realistically.”  She credits Pierre Bonnard, Henri Matisse, and Vincent Van Gogh as inspiration for her expressionist art, and Warhol, Pollock, and Frakenthaler as an influence on her abstracts.

The Tapped Apple Cidery & Winery exhibit will be Grabel’s first solo show in 10 years.  She has exhibited in galleries in New York, Connecticut and Rhode Island.  Her work was also included in a tri-state juried show at the Katonah Museum of Art in New York.

Grabel began painting in her 60s after a career as the director of publicity for Conran’s, a chain of home furnishings, headquartered in New York and founded by Sir Terence Conran.

A native of London, Grabel was evacuated as a child to Canada for six years during WWII.  Years after her post-war return to England, Grabel was introduced to her future husband on a blind date.  Dan Grabel was a New York-based news writer and reporter with the TODAY Show.  The two married in London in 1959 and chose to make their home in the United States.  Both Dan and Trish had successful careers while raising a family.  As their children grew and retirement neared, the couple purchased a summer home in Westerly.  Recently, Trisha moved her home and studio, once more, to StoneRidge Senior Living Community in Mystic.

The opening reception for the Trisha Grabel exhibit will be held on Friday, September 16 from 6 to 8 p.m. at the Tapped Apple Cidery & Winery.  The event is free and open to the public.  Refreshments will be served.

StoneRidge is a senior living, life plan community in Mystic, CT. StoneRidge, situated on 32 acres, is next to 100 acres of conservation land at the corner of Jerry Browne and Pequotsepos Roads. A few miles from historic downtown of Mystic, CT, StoneRidge is conveniently located close to Olde Mistick Village, the Mystic Aquarium, the Mystic Seaport, the Nature Center and the Mystic Museum of Art. StoneRidge is managed by Life Care Services (LCS®), the leader in developing and managing senior living communities nationwide.

Trisha has now been featured in the paper! View the news article here: https://sorhodeisland.com/stories/opening-for-trisha-grabel-solo-show,98731

If you have a question about our senior living community, want to be on our mailing/emailing list, or would like to speak with one of our residents, fill out the form and we’ll be in touch.

This is for testing purposes